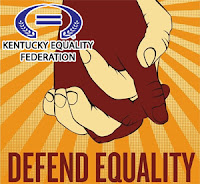 The Earth Equality Alliance, Kentucky Equality Federation, and Marriage Equality Kentucky (an alliance of more than eight (8) organizations with a common spokesperson and unifying secretary-general) today commented on the California Attorney General adding the Commonwealth of Kentucky to its travel ban.

After the passage of Kentucky Senate Bill 17, Kentucky Equality Federation promised to sue should a student suffer from discrimination as a result of the law, as reported by the Lexington Herald-Leader.

“Fanatics are now trying to turn religious freedom into a license to discriminate and it will not be tolerated,” stated Secretary-General Jordan Palmer.

“Kentucky Equality Federation and its attorneys have never lost a lawsuit, from NKU, Hazard, to the Warren County Detention Center to striking down Kentucky’s same-sex marriage ban by a Kentucky judge. We are eager to sink our teeth into what fanatics are twisting as so-called religious freedom. Perhaps it is the religious belief of someone to sell their firstborn female child into slavery, but that person would also be convicted of a criminal act and this is much the same.

The freedom of religion gives you permission to worship as you see fit as per the constitution of this Commonwealth. If someone believes that isn’t the definition of religious freedom, then they do not understand the meaning of it. But, religious freedom is commonly understood.

No law may supersede the Constitution, even with a ballot outcome (see Kentucky Equality Federation v. Governor Steve Beshear).”

No preference shall ever be given by law to any religious sect, society or denomination; nor to any particular creed, mode of worship or system of ecclesiastical polity; nor shall any person be compelled to attend any place of worship, to contribute to the erection or maintenance of any such place, or to the salary or support of any minister of religion; nor shall any man be compelled to send his child to any school to which he may be conscientiously opposed; and the civil rights, privileges or capacities of no person shall be taken away, or in anywise diminished or enlarged, on account of his belief or disbelief of any religious tenet, dogma or teaching. No human authority shall, in any case whatever, control or interfere with the rights of conscience.

Palmer continued: “The Kentucky Constitution guarantees freedom of religion as intended, that neither the commonwealth nor any power shared with the federal government, shall never force a religious belief on its citizens or force them to attend any particular religious services.”

The travel ban was first put into effect January 1 when state measure AB 1887 became law. The law says California is “a leader in protecting civil rights and preventing discrimination” and should not support or finance “discrimination against lesbian, gay, bisexual, and transgender people.”

This will also have a great impact on sports.