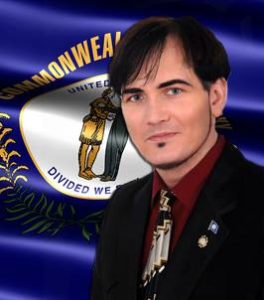 Jordan Palmer (Col. Jordan Bowling Palmer) has been active in civil rights and a public advocate for decades.

Born to a preacher (who does not speak to him because he is gay) and a lady outside Hazard, KY, Palmer attended a private Methodist boarding school, Leslie County High School, and earned his JD (Juris Doctor).

Palmer also served as on the Board of Directors and the Executive Vice President of Development of Marriage Equality USA (based in San Francisco, California) from 2007-2009.

Palmer also had Kentucky's same-sex marriage ban struck down by a Kentucky judge months before the U.S. Supreme Court ruled on the issue in Kentucky Equality Federation v Commonwealth of Kentucky (based solely on Palmer's legal theory).

His accomplishments speak for themselves and his impact on Kentucky and United States history, undeniable.

Palmer also fought Prop 8 in the state of California.

#Kentucky #Republicans went hard on a controversial, hot-button topic in appearances at the Fancy Farm picnic on Saturday: #transgender people in sports. Democrats were none too pleased. ... See MoreSee Less

FANCY FARM, Ky. — Republicans went hard on a controversial, hot-button topic in appearances at the Fancy Farm picnic on Saturday: transgender people in sports. Democrats were none too pleased. Kelle...
View on Facebook
· Share